Integrating the Circle of Courage Into PE Programming 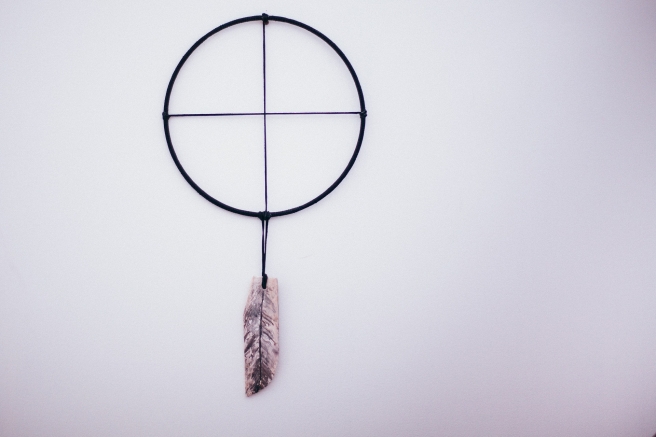 Over the course of my career since having a family (our girls are 24 and 26), I have at times viewed education much more from the perspective of a parent rather than as a teacher or academic. I apply this parent perspective, at times, when our division introduces new initiatives. I am a firm believer that while the role of education and schools is about student learning, it is about building better people. The various curricula that we are mandated to teach are but a vehicle to help build better people.

In the 2016-2017 school year the Circle of Courage had become an integral part of the forms classroom teachers and schools would use to create their class and student profiles. As a result, my Coordinator colleagues and I were respectfully challenged as to how we could support schools and teachers in understanding and implementing the Circle of Courage within our own program areas, which for me is Physical Education/Health Education.

The Circle of Courage is based on the Medicine Wheel, which for First Nations people of Manitoba represents the need for all things to be in balance and harmony. The four colours represent teachings and understandings of how we look after each other and the environment, while on the four points of the cross are the crucial development needs of children: belonging, mastery, independence and generosity.

It was after this initial introduction to the Circle of Courage that I immediately saw the connection with the work we do in physical education – or at least what I hoped we are trying to accomplish. That is to work towards all our students having a sense of belonging, feeling a sense of mastery or the confidence to try new things, to become independent and to be a generous person. In other words, help build better people through Quality Physical Education (QPE) programming and intentionality with respect to reference to the Circle of Courage and its connection to what we do in QPE programs and the larger divisional initiative. This was my personal response to my Why?

The answer to the larger Why is the Circle of Courage important is as follows. 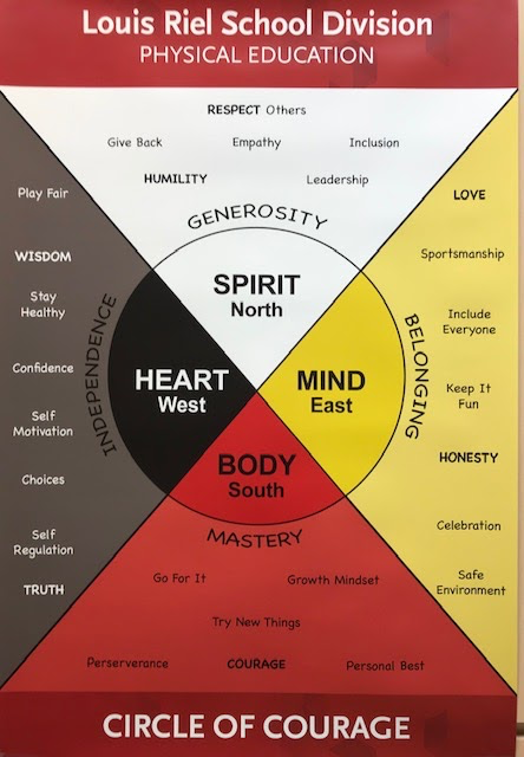 The Medicine Wheel being used in the Louis Riel School Division is the Anishinaabe medicine wheel. It is regional – the land on which we gather is Treaty 1 Territory and the traditional territory of the Anishinaabe.

The Medicine Wheel we are using has been adapted to include the Circle of Courage because of work being done initially in two schools who were working with Dr. Martin Brokenleg. The purpose was to help bring Indigenous knowledge and culture into curriculum and promote Indigenous success. It is congruent with the work done by the Divisional Indigenous education team, Elders, and Knowledge Keepers. It is a holistic approach to how we see the world.

Furthermore, it is important for the 13% of our 15,500 students who self-declare as Indigenous that they see themselves reflected in the work we do. This work is also important as it begins to address call to action #63 of the Truth and Reconciliation Commission of Canada: Calls to Action.

In the fall of the 2017-2018 school year the PE staff of the Louis Riel School Division were introduced to the Circle of Courage by Corey Kapilik the Divisions Coordinator of Indigenous Education. In addition to Corey’s teaching, the staff watched a video called First Nations Principles of Learning where Dr. Martin Brokenleg explains the elements of the Circle of Courage. Following the video, the PE staff worked in small groups to brainstorm what belonging, mastery, independence, and generosity would look like in our QPE programs. This large session was followed up with a sub-committee of eight PE teachers working with myself and Corey over two sessions.The intent was to gain a deeper understanding of the Circle of Courage, identify the key ideas that PE teachers had brainstormed and how those connected with each of the four elements.

These key ideas were meshed with the Principles of True Sport which the PE staff of Louis Riel had adopted.  And finally, the Seven Teachings (Love, Respect, Courage, Honesty, Wisdom, Humility, and Truth) were included as many of our elementary schools were using these as part of their school-wide Indigenous education initiatives.

From this work, a visual representation was created that is intended to be used as a teaching tool in our PE programs. It was from this small group that we developed a number of strategies to introduce how to introduce or implement the Circle of Courage in PE programs as these individuals were already doing so to various degrees.

This takes us to the fall of 2018 and another session with Corey and one of the Divisional Ojibwe language teachers and cultural consultants. We began the session with two of the sub-committee members taking the large group through an activity they had done in their school to introduce the Circle of Courage to their students. We posted on each of the gym walls using cardinal points, the terms we had generated for the poster and asked what each set of terms had in common. This allowed us to take our discussion to a large group to gain a deeper understanding and reflect on our own practices. Another source of information to help understand what the Circle of Courage is, is the book Reclaiming Youth at Risk: Our Hope for the Future. This book was made available to the Physical Education staff within the division. 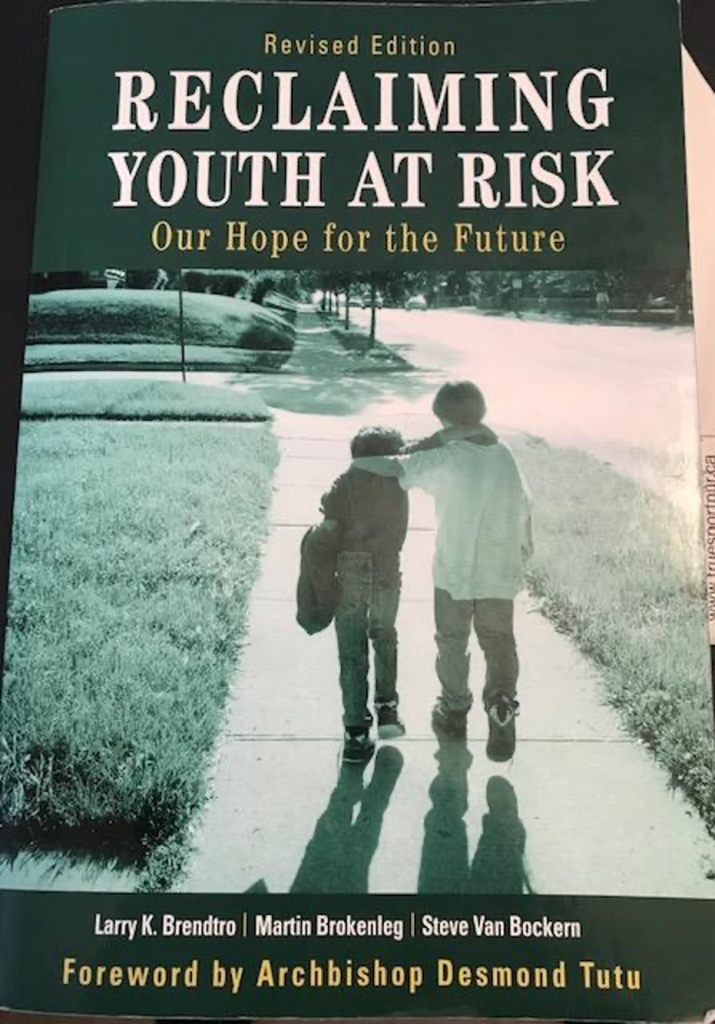 In the spring of 2019, the posters were complete in both English and French and disseminated to schools to display and use in their teaching spaces. We continue to deepen our understanding of the Medicine Wheel and the Circle of Courage and how we can connect that to the work we do in our QPE programs. This continues to be important work as the Division launched its Multi Year Strategic Plan (MYSP) of which the Circle of Courage is the foundation.

For more information on the MYSP, please visit https://www.lrsd.net/About-Us/Pages/Multi-Year-Strategic-Plan.aspx

Grant McManes is a Past President of both what now is PHE Manitoba and PHE Canada. Grant has remained an active member of PHE Canada as a member of the Physical Education/Physical Literacy Advisory Committee and the Legacy Fund Committee.

Previously, he served as the Healthy Living Coordinator for the Louis Riel School Division in Winnipeg, Manitoba. An educator for 33 years, he has taught In his 33 year as an educator, he taught K-12 physical education in both rural and urban settings. For 25 years, Grant has worked as a supervisor/consultant/coordinator helping physical educators and health educators implement curriculum and develop new programs. This includes a two-year secondment with Manitoba Education responsible for the development and implementation of the mandatory grade 11 and 12 PE/HE credits.